The store will not work correctly in the case when cookies are disabled.
Menu
Account
Hangar 9
HAN 2390

Due October
$899.99
Skip to the end of the images gallery 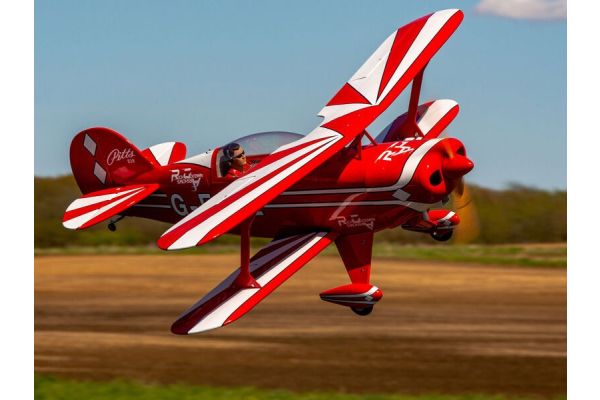 Designed by revolutionary aerobatic plane designer Curtis Pitts, the Pitts S-2B was one of the many variations of the S1 and S2 aerobatic biplanes. During the 1960s and 1970s, the Pitts biplanes were a major force during world aerobatic competitions. Still flying around the world, the Pitts S-2B is an air show mainstay and crowd-favorite. The Hangar 9® Pitts S-2B 50-60cc ARF brings this aerobatic showstopper to life in a classic-scale scale platform with true scale proportions.

For the sport, scale, and aerobatic pilot, the new officially-licensed Hangar 9® giant-scale Pitts 50-60cc delivers on a classic-scale aerobatic platform with true scale proportions, ease of assembly and impressive flight performance. Featuring scale details typically not found on other ARF aircraft, the incredible recreation has outstanding flying characteristics that Hangar 9 is known for around the world. Constructed with lightweight balsa and plywood for a rigid and strong airframe, it features multiple quick release hatches allowing for easy access to fuel equipment and electronics. The biplane exhibits an iconic scale scheme by airshow pilot Rich Goodwin, quad aileron servos for precise control and aerobatic agility, and so much more. It will perform extreme aerobatics just like its full-scale inspiration using your choice of gas or brushless electric power options. It comes out of the box with a level of scale fidelity that truly sets it apart from the rest. No matter how you fly, the Hangar 9® giant-scale Pitts S-2B ARF delivers incredible thrills at the flying field.

Distinctive Subject Matter
The Pitts S-2B ARF is an officially-licensed model in our line of 50cc-60cc giant scale aerobats. This giant-scale Hangar 9 replica is every bit the stunner its full-scale inspiration is.

Wide Appeal Wide Appeal
The biplane is specifically designed for intermediate to advanced giant-scale pilots of all interests: sport, scale and aerobatics.