The store will not work correctly in the case when cookies are disabled.
Menu
Account
PowerBox Systems
PBS 8301 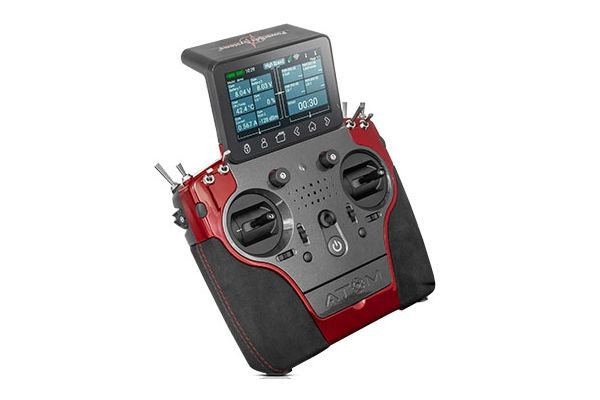 The ATOM radio control system establishes a new standard in the market segment of upper mid-range systems. Based on the considerable expertise we have gained from the CORE, together with new developments in electronics, revised software, a smaller Linux computer and a revision to the method of case manufacture, we have been able to create a system which has few rivals in terms of price : performance ratio.

The system’s crucial feature is the ingeniously simple operating system, which is exactly the same as that of the CORE - it is even possible to interchange model files between the ATOM* and CORE.

As you would expect from PowerBox, we have allowed no compromises in the matter of redundancy: the radio system and its power supply are of fully redundant design.

Menu structure
The ATOM menu - adopted from the CORE - presents the pilot with a freely programmable system which is primarily defined by functions. Special menus for mixers such as Butterfly (Crow), Combi-Switch (CAR) Snap-Roll or other fixed structures, which are a throwback from the 1990’s, are simply not present in the ATOM. You just create a function, consisting of one transmitter control and the servos assigned to it. Multiple functions can be assigned to any servo. A good example is the two functions “Aileron” and “Flap”, both of which operate separately. The additional function “Butterfly” (Crow landing aid) is then used to set up the already assigned servos individually for the third function - without affecting the settings of the first two functions.

Additional menu points such as ServoCut, differential or virtual switches are also available for all functions, enabling the pilot to set up each model to suit his personal requirements in the shortest possible time. The system also offers a powerful supplementary tool in the form of a clearly comprehensible flight phase structure, which can be used to solve even complex tasks quickly, without the need for protracted study of the instructions.

Radio transmission
The radio link implements a highly effective frequency hopping process, utilising 66 channels in the 2.4GHz band. Radio range is more than 9km, which is unique to PowerBox systems. This offers maximum possible system reserves, which is essential when security has top priority - especially when conditions are difficult. The ATOM provides redundancy in the radio link, which is monitored by the receiver. If a fault should occur in one transmission unit, the receiver can alert the pilot immediately via telemetry. The reliability and interference rejection of the PowerBox radio link has been proved in thousands of hours’ operation with the CORE!

Signal transmission
The ATOM can transmit 18 channels at 2048-bit resolution with a data rate of 10ms. All channels are transmitted simultaneously in a single data packet, ensuring minimal latency and maximum precision.

The performance of the telemetry feedback channel is also unique in the RC world: data can be transmitted from the model to the transmitter at a rate of 800 x 16-bit packets per second. The maximum number of sensors is 250, each of which can deliver 32 sensor values - a gigantic quantity of data which is recorded in the ATOM transmitter, and is available for subsequent analysis.

P2-BUS Telemetry
The P2-BUS, developed by PowerBox Systems, transfers servo and telemetry data simultaneously on one conductor. This simplifies the cabling in the model with conventional servo leads and Uni connectors.

All the sensors on the P2-BUS have individual addresses, which are automatically assigned by the transmitter if they are already in use. This means that the sensors in the model can be connected without the need for active hubs - all the sensors are connected to the receiver by means of Y-leads or the passive P2-Dock.

When the system is switched on, each sensor sends all the information - such as sensor names or units of measurement - to the transmitter, making it possible to connect new sensors to the system at any time, without requiring a transmitter update. A wide range of sensors is available from PowerBox Systems, but there is also a large number of sensor manufacturers who support the P2-BUS system.

Power supply
In typical PowerBox fashion, the ATOM’s power supply is of redundant design. This means that two separate Li-Ion battery packs, each rated at 3400mAh / 7.2V, and the entire voltage regulation system are duplicated. This feature is exclusive to radio control equipment made by PowerBox Systems, as it always has been. Battery duration is a minimum of 7 - 8 hours, varying according to the screen brightness.

Operating system
Inside the ATOM we find a modern, high-performance Linux industrial PC, which is controlled exclusively using the touch-screen. The operating methodology and ‘touch and feel’ are identical to those of a smartphone. In conjunction with an intuitive user interface, which provides the user with direct routes to associated settings, the system allows the user to complete a model’s programming with just a few inputs.

Every aspect of the user interface was programmed using Toolkit Qt. This development environment is today the accepted standard in the field of the Embedded GUI, and is utilised by many renowned manufacturers. The screen employed is manufactured to the specific requirements of PowerBox Systems, and is very clearly legible even in full sunshine. Just a light touch of the surface is all that’s needed to operate the capacitive touchpad. Smart Keys (quick-select buttons) are located at the bottom edge of the screen, and provide rapid access to important functions such as the servo monitor and screen lock.

Internal data communication is implemented using the CAN-BUS. This Bus system has been employed successfully for several decades in the fields of road vehicles and aviation, and is tailor-made for PowerBox application.

Look and feel
Just hold the ATOM in your hand, and you immediately feel at home: all the switches are positioned just where you would expect from a High-End system. The pilot instantly has the impression of a professional “tool”, which he can instinctively control and handle. The detachable hand-grips, with their Alcantara surface, are pleasant to the touch at any time of year - as well as looking great. The transmitter also balances perfectly in the hands.

Highlights
One very special feature is the system’s unique speech output capability. The ATOM incorporates a licensed TTS (Text to Speech) server from Acapella. This is the most sophisticated TTS system currently available, and offers several different voices for every language; these can be used to provide spoken messages relating to telemetry values or switch settings. The complex task of creating audio files on the PC, followed by tediously copying them to the transmitter, is now a thing of the past.

A further unique characteristic of the ATOM is the ability to update receivers using the 2.4GHz radio interface. Pilots can carry out a software update without the need to remove an inaccessible receiver, which might have been installed at considerable effort. All it takes is a button-press, and thirty seconds later the receiver is up-to-date once more.

The ATOM also has an internal USB interface which permits the optional use of a Wi-Fi module. This makes it possible to call up transmitter or receiver updates on-line.

Equipment
The two primary sticks are machined from solid aluminium and feature quadruple ballraces; they sample each control input with 12-bit resolution (4096 steps). When digital signal processing is complete, a full 2048 steps are available. The four supplementary linear controls - two at the side, and two at the top - are also equipped with Hall sensors and twin ballraces; this means that no part of the ATOM is susceptible to wear.

There are four momentary switches in easily-accessed positions to left and right, adjacent to and below the sticks. These are supplementary transmitter controls which are perfectly designed for controlling wheel brakes, electric starters or a smoke pump.

Both versions of the ATOM transmitter - hand-held or tray-mounted - are supplied fully expanded. Naturally it is possible to order optional factory-fitted stick switches. Easy access to all the switches makes it simple for the customer to assign individual switches at any time.