The store will not work correctly in the case when cookies are disabled.
Menu
Account
Jeti
JETI BOX400 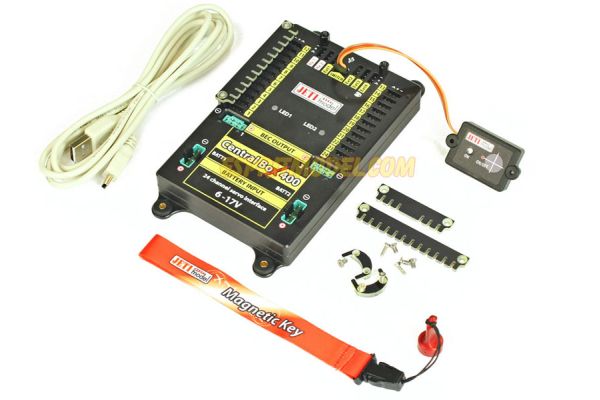 The Central Box 400 is fully programmable switchboard with two (2) independent, stabilized power voltage regulators (30A Continues/230A Peak) designed for complete power and signal management of servos with great emphasis on safety. The Central Box 400 has a unique design that provides power management, servo assignment, telemetry data stream, and overload protection for each one of the servo outputs. The Central Box 400 can manage up to two batteries and fully supports the Jeti EX telemetry data stream. Up to two receivers with serial (PPM, EX Bus, UDI) output as well as two power batteries can be connected at the same time to the Central Box for complete Power & RF signal redundancy. In addition the Central Box 400 has up to four (4) independent Ext1/Ext4 telemetry inputs and two (2) stabilized BEC outputs for additional electronic devices. For more safety, the Central Box 400 contains two switching regulators connected in parallel. The adjustable voltage at the BEC output is always the same as voltage supplied to the servos. Voltage for the servo can be adjusted from 5V to 8V in 0.1V steps.

In advance power setting you can independently adjust power input voltages. This way the battery with higher voltage can be used only as power battery backup and you can avoid constant charging and cycling both receiver battery packs.

With Jeti Duplex 2.4GHz DC/DS transmitters, the full potential of the Central Box can be used, such as an easy way to wirelessly configure the Servo Outputs, EX Telemetry, Fail-Safe Setting or Fast Servo Response.

If you connect Central Box to the PC using the USB port. The PC detects Central Box as a mass storage device. After the Central Box is connected to the PC, it becomes inactive and can be used only for data reading.

JetiBox Configuration
The JetiBox monitor/programmer can be used for parameter setting and retrieving data. After connecting to the Central Box (Ext4), a startup screen appears that contains identification of the device in the first line of the JetiBox display. The second line contains the data showing the consumed capacity of batteries. By pushing the R button (to the right) on the JETIBOX, you get to the expander menu.

Wireless Switch R3/RSW (Optional)
State-of-the-art device that sets Jeti as a leading designer and manufacturer of radio control systems. Wireless power switch is fully integrated into the 2.4GHz radio system. For first time your receiver can be turned ON/OFF with simple flipping of the switch wirelessly from the Jeti DC/DS transmitters.