The store will not work correctly in the case when cookies are disabled.
Menu
Account
Electronics International
EI MVP-50-4 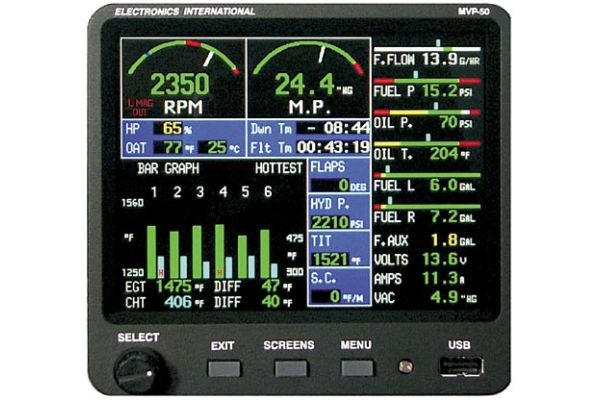 USB Port for uploading and downloading data. Flight Data, Checklists, Flight Plans and General Information Screens. Easy to install! Reduces the wire bundle to the instrument panel by over 100+ wires

What is the Electronics International MVP-50?

Without question, the MVP-50 is the industry's finest engine analyzer and systems monitor, hands down. Electronics International has redefined what an engine analyzer should be with the full color, glass-paneled, completely customizable MVP-50. The MVP-50 allows pilots to accurately monitor dozens of engine and system parameters, program redline limits, setup custom inputs, create interactive checklists, store general flight information, build flight plans, record and review pertinent data from every flight, and so much more. The MVP has been designed with the same thoughtful engineering that goes into every EI product, so even though the MVP-50 is by far the most powerful system in the industry, it is sure to be one of the easiest systems to use in your cockpit.

Programmable over-temp limits provide pilots with immediate alerts whenever critical function parameters are exceeded during flight. Onboard data-recording gives pilots the capability to review entire flight histories for any flight. A complete bar graph gives critical engine information during flight, including leaning assistance, temperature differentials, audible and visual limit alerts. The System Screen is dedicated to aircraft systems, including flaps, trim and rudder, as well as whatever other functions you want to view. Customizable checklists visually inform you which steps have and have not been completed in each checklist. General Information Screens and Flight Plan Screens can be customized to store critical flight information, allowing you to create a "virtual cockpit," free of the pieces of paper pilots regularly have to juggle to stay on top of in-flight operations.

The RPM is displayed in large, bright, crisp digits as well as in a 270 degree graphic arc, so you can simultaneously monitor RPM at a glance and with precision accuracy. Wires from the MVP-50P harness connect to the back of the aircraft ignition switch and pick up the signals from the magnetos. The MVP-50 provides lightening quick RPM response while maintaining rock solid stability.

Like the RPM, the Manifold Pressure is displayed in large, bright, crisp digits as well as in a 270 degree graphic arc. You will be able to dial in your Manifold Pressure with precision when flying with the MVP-50.

The MVP-50P simultaneously displays Outside Air Temperature in Celcius and Fahrenheit, meaning you don't have to do in flight conversions or switch between the two. Ice Zone warnings can be set to alert you when temperatures reach ranges within which ice can form.

EGT and CHT are always shown for each cylinder, whether in Bar Graph or Digital Mode. Temperatures have a stable, one degree resolution for accurate leaning and engine diagnostics. Both EGT and CHT differentials, as well as the hottest cylinders, are always displayed for quick reference.

Fuel Levels: Up to four fuel levels at a time may be monitored and displayed on the Main Screen at one time.

Electrical System: The precise resolution of .1 volts and .1 amps allows you to accurately monitor and manage the load on your aircraft electrical system and the health of your battery.

Timers: Select from Up Timers, Down Timers, Flight Time and Clocks.

The MVP-50P comes complete with a full engine analyzer. The MVP-50P bar graph displays EGT & CHT, has programmable redlines for each cylinder, displays temperature differentials, assists with leaning for ROP and LOP operations, and has an easily resettable Normalized Mode with long-term memory for engine trend analysis.

Regardless of the parameter you monitor with the MVP-50P, the operating ranges are completely programmable. The MVP-50 will alert you via visual and/or audible alarms when a parameter exceeds the programmed limits.

Several different functions are available, including Gyro Vacuum, Flaps, Hydraulic Pressure, Pressure Altitude, Airspeed, virtually any temp or pressure, plus more! Or, add an additional voltage or amps to monitor a secondary bus. The MVP-50 even allows you to create and name your own functions. The options are nearly limitless.

The System Screen provides pilots with tremendous flexibility by providing a whole other page to monitor important functions. Any function, from trim, flaps and rudder to baggage door relays can be monitored on this page.

If you have a sensor with an output, the MVP-50P can monitor it. Simply program the MVP-50P to accept the input, and name the input whatever you want. The options are virtually endless.

Each parameter monitored by the MVP-50P can be programmed with ranges and limits. If the parameter exceeds a programmed limit, the MVP-50P will alert you immediately, either via an audible alarm in your headset, a bright external LED, a flashing number on the MVP-50P or a combination of the three.

Regardless of what you choose to monitor on the System Screen, all of the main functions from the Main Screen are still shown on the righthand side bar. Every displayed Main Screen Function is depicted graphically and digitally for easy reference and precision.

The MVP-50 boasts a fully functional bar graph, complete with ROP and LOP leaning modes, a Normalized Mode, state-of-the-art “peak markers” and separate programmable limits for each cylinder’s CHT and EGT to alert the pilot of any engine trouble.

The Rich-of-Peak mode on the MVP-50 informs the pilot when the first cylinder peaks, as well as how many degrees below peak the engine is operating.

For Lean-of-Peak Operations, the MVP-50 informs the pilot as each cylinder peaks, at what temp each peaks, and how far from peak each is. For quick reference, every cylinder’s peak information is constantly displayed and “tattletale bars” are shown above each cylinder, indicating where each cylinder peaked the last time the engine was leaned.

The Bar Graph can easily be “Normalized,” creating a baseline from which to monitor in-flight engine temperature changes. When Normalized, all of the bars start off at the same height. If any cylinder's column is not the same height as the others, than that cylinder's Exhaust Gas Temperature has changed in relation to the other cylinders. These changes can be critical indicators to problems occurring within your engine.

While other monitors don't maintain your engine's leaning history, The MVP-50's Bar Graph keeps track of exactly where the cylinders peaked during each leaning process. When leaning, the MVP-50 displays a peak marker indicating where each cylinder peaked during the last leaning process, providing visual assistance to pilots.

The MVP-50’s dynamic Weight and Balance screen allows pilots to enter weights for each individual arm of the aircraft. Arms are input and stored during system setup. The screen also displays the weight of fuel onboard, as well as the maximum weight, total weight and the difference between the two. The aircraft Center of Gravity is also digitally displayed for quick reference.

The MVP-50 records each flight, which allows you to perform post-flight analysis on the engine and system parameters of your aircraft. When you decide to review the flights, simply download them via the USB port and upload them to your computer. Either view them in EGView, or look at the numbers in a number-crunching program such as Excel.

Each flight has a Flight Log assigned to it, which contains the flight in its entirety. The MVP-50P permits you to adjust how often data is stored, so it is possible to record parameters as often as three times per second to as little as once per six minutes. Each Flight Log is also time and date stamped for easy identification, so you don't need to remember which flight is which when scrolling through your Flight Log history.

If you don't want to analyze an entire flight, simply review the minimum and maximum flight logs stored in the MVP-50P. These logs are a simple history of the maximum and minimum parameters reached during specific flights. These logs are stamped with the same flight number as their corresponding flight log, so if you decide to analyze the entire flight, you can easily identify it by its number.

Create Checklists for any procedure, such as Takeoff, Landing, Emergency Procedures and more. The MVP-50P allows pilots to store as many as 100 unique, programmable checklists, so you will never run out of storage space. All Checklists are stored alphabetically in the MVP-50, and can be retrieved with the click of a button.

The MVP-50 Checklists are not simply lists of tasks, but they provide feedback to the pilot. For instance, for a Runup Checklist, the MVP-50 can include RPM and RPM Drop for testing your mags. Also, the Checklists allow you to place a checkmark next to any step in a list as each step is completed. If you exit a Checklist to view another screen and then return to the Checklist at a later point during the flight, the MVP-50 will remember the exact step you were on when you were last using the Checklist.

With the MVP-50, you will never again have to guess as to your fuel-on-board status. The MVP-50 keeps track of Fuel Flow, Fuel Remaining, Time to Empty, up to four Fuel Levels, Fuel to Waypoint, Fuel in Reserve once your next waypoint is reached, Miles per Gallon, Fuel Used since your last fill up and Fuel Used for each flight. Though Fuel Flow is accurate to .1 gallon, pilots may choose to display fuel in Gallons, British Gallons, Liters or Pounds.

The MVP-50 not only displays Fuel Level, it also displays a "calculated" Fuel Remaining. This Fuel Remaining is based on the factors of time and your Fuel Flow. For example, if you start with 40 gallons on board and have flown for one hour at 10 gph, you will have 30 gallons remaining. Providing the pilot resets the fuel level when the tanks are refilled, this function is an extremely accurate and powerful tool to assist you with fuel management.

The MVP-50 automatically determines how much time is remaining before the tanks run dry. This function is calculated on current Fuel Flow and Fuel Remaining. The MVP-50 will alert you when the Time to Empty reaches a pilot-programmable limit.

Up to four fuel levels at a time may be monitored and displayed on the MVP-50. Though Fuel Levels are accurate to .1 gallon, pilots may choose to display fuel in Gallons, British Gallons, Liters or Pounds.

Another feature the MVP-50 derives from Fuel Flow and GPS information is Miles per Gallon. You will be able to immediately determine the best fuel economy for your flight, while in the air. Pilots can switch between Statute Miles per Gallon and Nautical Miles per Gallon.